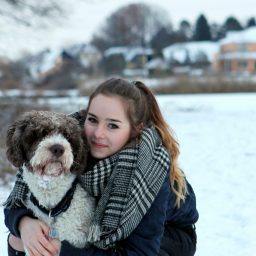 The 22nd of October- we have all been waiting for this day for nearly half a year. Six months ago we got our letter permitting us to take part in this awesome project. This Sunday was the day we saw our beloved ones one last time before our arrival back in Kiel on the 21st April next year. So it is the first day of our great journey across the Atlantic Ocean.

The day before saying good bye all of us had the choice to sleep on the Thor Heyerdahl, our new home, or to stay one last night in a hotel with our family members. I, myself was with my parents. It was quite weird to know that it was the last time for such a long time. First, I went out to have dinner with my parents in a restaurant. There I met many other KUSis. We all ate pretty much because some ExKUSis told us, that there might be some food shortages on the ship. The ExKUSis have hidden sweets, sometimes there was also a short message with it, in our jackets and rooms which we found afterwards. I am sure we will need it.

The ceremony of saying goodbye started at 10 o`clock and ended at 11 o`clock. First, the choir of the KUSis 17/18 sang „Wir lieben die Stürme“ and „Möge die Straße“. Afterwards all KUSis sang the „Thor Hymn“, which was rearranged by Ferdinand our Maths and Physics teacher. We have practised this song very often during the shipyard. All the singing lessons were organized by the project choir of our year. Between the songs different speeches were given and all crew members of this trip got an Advent Calender by Kiel’s city president.

Of course our parents had prepaired something, too. They sang two songs called „Santiamo“ and like we did „Möge die Straße“, an Irish blessing. They also boke bread with messages for every one of us on it.

Saying goodbye was more emotional than I had expected. We only had ten minutes during the ceremony to hug our family, to speak to them, to say goodbye… Many of our parents cried a lot and you could also see tears in the KUSis` eyes, although most of us have not realized yet, that we already ARE on the journey of our lifetime. Personally I was one of them, too.

Before we were setting sails (ten minutes after the planned time) we were taught what to do in case of an emergency situation. After seven short and one last, long ringing tone we put on the lifewests. Those are located in a bag above the bunk of everyone. After taking these wests from our cabins we went on the main deck, put them on and controlled if all crew members of the sailing ship were there. Luckily all of us were.

Of course it was a very hard and sad hour of the day. Maybe the hardest one for some of us for the next six month, but now I am looking forward to all the new experiences we will make and all the things I am going to learn about the ship and the different countries. Although I miss my class at home, my friends and my family members. But I am happy to be here with so many new friends that are also a kind of new family for me.