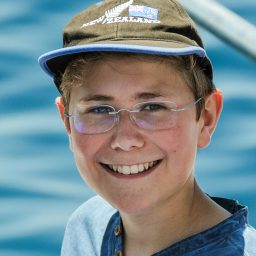 When we docked in the harbor of Horta, Acores, we were back in Europe. It has been four months since we left our home continent by leaving Tenerife. Since then we have been traveling and have been to two other continents and six countries. Now, after countless experiences, we are back on the continent that we started in. Additionally, the Acores are the last bigger stop of our trip.

Arriving in Horta was a big step in our journey back home. It did not take us a long time to notice that we were back in Europe: There were “normal” supermarkets similar to those in Germany, taxis had a suspension – not normal everywhere – and the telephone charge for calling our friends and family at home was not astronomically high anymore.

Since we had really fair winds on the last part of our journey, we arrived in Horta on the evening of the 21st of March instead of the 23rd. But unfortunately school doesn’t just disappear with arriving in a harbor, so our first day back in Europe was a school day. Another part of the school program was the feared Math test – but with writing this test we were finally done with school for the whole journey, which caused many to celebrate.

During our stay in Horta, we also worked a lot on our projects, so we met up twice to get our work done and to prepare for the final presentation. It was held on Monday evening and it was quite interesting to find out what all the other projects had worked on in the last months. The “plastic in our ocean”-project also organized that we were allowed to join a local trash collecting action on Saturday. Although that was a hard work, it also was fun to see what one could find – I personally ended up with 2 fenders, 2 life-belts, a ton of metal trash and much more… In the end we and some locals had collected over 600 kilos of trash on 3 beaches. After that we met up in a café, listened to some presentations and presented our plastic project ourselves.

The harbor of Horta is very famous and well known within sailors and as a sailor you practically have to visit it when crossing the Northern Atlantic Ocean. The pier of the harbor is very special, because every sailor, who docks in Horta, draws a little piece of art on the pier. It is a lot fun to watch the pictures and imagine all the stories behind them. We also left our mark for posterity with a picture on the colorful pier.

In Horta there also is the famous sailor café “Peter Café Sport” that is a real experience to see and many sailors in the world want to visit it. There, we were allowed to hang up a pennant of KUS 17/18 close to many pennants of other sailors, which was a great honor for us. The harbor of Horta was also visited by similar projects with their sailing ships at the same time. We had met these ships on our journey before, but it was the first time that the “Thalassa”, “Regina Maris”, “Roald Amundsen” and we with the “Thor Heyerdahl” were in the same harbor all together and it was fun to meet other students, talk to them and exchange experiences. Of course there were also other interesting ships in the harbor: I got to visit the beautiful “Eye of the Wind” with a lot of wood; and a very special yacht, which was quite simple and mostly self-built by the first Grenadian to cross the Atlantic Ocean alone, who was also very interesting to talk to.

The Acores are very famous for whale watching. Some species are found around these islands all year round, like the sperm whale, others only pass by on their travel routes, like the blue whale or the fin whale. Since these species visit the Acores at the end of March and early April, we all were very excited, when we went whale watching on Thursday! With 300 PS-speedboats we dashed over the surface of the water. In the beginning we did not see any whales, but turtles and dolphins, which were also nice to observe.

Then, suddenly, there was a radio message that caused all boats to turn around at once and shortly after that, we saw the blow of a fin whale and could only imagine the giant animal below. But we got even luckier: After seeing another fin whale, we got to watch a blue whale, the biggest animal to exist on the planet. It blew out; we could observe its fin and realize the gigantic size of the whale. To finish its appearance, the whale showed us its enormous fluke, which was even more special because only 10 % of blue whales do that. Everybody was really amazed and we were all quite happy and content when we arrived back in Horta.

Another part of the program at the Acores was our expedition to the peak of the Pico Mountain. In the daybreak we went to the neighbor island with a ferry and then with minibuses to a mountain house. From there, we set off to the peak with guides. The way was less exhausting than I had expected and we had a nice view from above the clouds. We were accompanied by Rene, a geology doctoral candidate, who could tell many interesting facts about the history of the islands and the creation of the mountain.

After a bit more than three hours we arrived at the peak of Pico and enjoyed the astonishing view over a “sea of clouds” and the neighbor islands. We took the same way down and back at the “Thor Heyerdahl”, most students were a bit tired and happy to be able to sit down and relax a bit.

But during the whole stay, there also was a lot of free time, which we all liked very much. We used that time for shore leave together and ate pizza, met with the students from the other sailing projects or enjoyed delicious chocolate cake in “Peter Café Sport” – which you have to try if you ever visit Horta! But we also relaxed a bit on the pier and called our family and friends at home.

Sadly, Thursday afternoon – after getting everything ready for the approaching stage of the trip and changing rooms for the last time – we had to say goodbye to Horta, set sails and left the harbor with course to Falmouth. With that, our last bigger stop got to an end – a last stop that we all have enjoyed a lot.