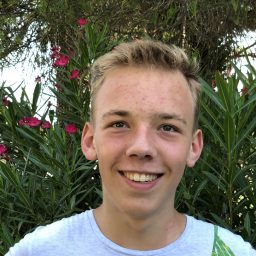 Before our journey started, we had already heard of this mysterious thing, the so-called „Atlantic Baptism“. Some Ex-KUSis asked us if we knew what would expect us. Of course we did not. However, none of them told us anything about it.

However, I was interested in the Atlantic Baptism, for this reason I tried to find out more details about it in our library. Still, I did not get any information about the procedure itself. Instead, I found out when and why this ritual is celebrated: When people cross the Atlantic Ocean for the first time when being part of a sailing crew, they get baptised with a certain ritual in order to become a „real“ part of the crew. This ritual takes place after crossing the 40th longitude.

Now, let me tell you something about our Atlantic Baptism: Some days before there were some signs which showed us that something bigger would come up soon. One night while the night safety round, the watch on duty found a mysterious message in a bottle in our swimming pool. In this message it was written down that Neptun himself with his fellows would arrive on the Thor Heyerdahl and we would have to be in the mess room at 1 o‘clock after lunch, wearing swimwear. The second sign was that one evening we were not allowed to go into one certain part of the ship, and also some people from the crew were missing.

A few days later it was a Saturday and we knew that that our big day has arrived:

It was a normal Saturday, almost. But then we met on the deck and our captain Johannes told us to go downstairs and wait because Neptun would need a bit of time to arrive. So all sat down in the hot mess room in our swimwear. Many of the bulkheads were closed so we only did not get a lot of fresh air and were sweating a lot. We were waiting and sweating and waiting. Still – nothing happened.

Suddenly, there was a lot of terrible loud noise from upstairs. I could hardly stand it. After a while we heard a voice that said: „Are you scared? You better should be! We want everyone – students, sailing crew, teachers! Muhahahaha! At first we want to have a teacher. Paul!“ Now we knew, the Atlantic Baptism had started. But this knowledge did not help us to lower down our nervosity. One after another we were called to come up to Neptun and his fellows. Sometimes the people who had not been called yet heard screams from upstairs, but we thought that someone was standing behind the entry. After some people already had gone upstairs, we were still sweating and waiting. In order to not think about what would be happening upstairs, we started to sing. I can not describe that atmosphere in words, maybe just incredible. Then suddenly I heard my own name. I went upstairs…

And in a secret procedure I got my new Atlantic name. Nobody who has not gone through that ritual by themself is allowed to know what the procedure is like. But I can tell you this much: You always get babtised by your Atlantic name and this is always a fish name. Mine for example is „Opernhecht“. Is this maybe because I enjoy singing? Only Neptun knows…

The rest of the day was really good, because the galley had made a cake out of pancakes with jam between them. It was amazing. And after a long, exhausting day I fell asleep and dreamed of the Atlantic Baptism and pancakes.

I hope i could show this very special day a bit, altough I could not give closer informaton to the baptisam. Then for you, the Atlantic Baptism is still a secret, but that is how it works.