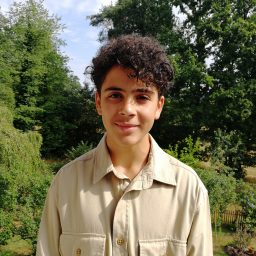 Green ones, blue ones, mountainbikes and lady bicycles, some with only one gear and a backpedal brake, even a folding bike: At the 26th January, 35 bicycles with 33 excited pupils and two teachers could be found in the hotel of Maria la Gorda. Gladly, riding bikes does not belong to the things one forgets even after three months. Nevertheless, the first meters by bike were a bit shaky. Everybody tried out their bikes and repaired last broken parts, preparing for the tour on the day after.

The next morning we formed a caravan: in the front two policemen riding motorcycles, then all the bikes followed by another policeman and at the end stayed our bus carrying all our backpacks. The first hour we followed a street next to the coast. After that we drove towards the inland. In regular intervals the whole caravan stopped at the roadside and the cyclists went to the bus in order of getting drinking water. Just in time for lunch we arrived at a small restaurant where we ate our first peso pizza (more about them in the blog about Cuban Food). Filled with energy we continued, passing farmers and small villages with small, flat and colorful houses. Many Cubans waved their hand and shouted a friendly „Hola“ for us. The street was straight almost the whole time and had barely any hills. That day we almost kept to the same street and only had to turn two times. We shared the empty street with horsecarts and, rarely, with cars, motorcycles or other bicycles. In the afternoon we arrived at our hotel in Sandino. The whole hotel crew and the Cuban television welcomed us. Surprised and a bit overburdened we were pleased about the friendly reception. Normally only Cubans, no tourists, stay there.
Odometer: 70 „Cuban-Kilometers“ (~60km)

The following day we woke up and our legs were a bit tired and our bottoms hurt a bit, anyway today we had to ride an even longer distance than the day before. Starting was hard, but after the first half hour everybody found his or her rhythm. Getting more towards the inland, the streets got busier and also better, way less potholes. Simultaneously, the landscape got hilly. For lunch we ate pizzas again, even better ones than the day before. After another hour’s riding, suddenly more and more houses appeared, we arrived our destination: Pinar del Rio. Our Cuban guide Lala praised us for being the fastest group ever.
Odometer: >80 „Cuban-Kilometers“ (~<70km)

[A small explanation about the „Cuban-Kilometers“: Everyday we got told we would ride many more kilometers than we rode in the end. For me it was a bit funny everytime, so I baptized the phenomenon „Cuban-Kilometers“.]

For the next two days we only rode ten minutes to the Friedrich-Engels-School and returned to our hotel afterwards. Anywhere we went we had policemen escorting us.

On our way to Vinales, we first had to get up a mountain to get down in the valley. Soon after leaving Pinar, the street got steeper. Especially for the bicycles with only one gear it was not so easy. But once we reached the top, we could relax and let the bikes roll.
Odometer: ~ 30km (today no „Cuban-Kilometers“, because nobody told us exactly how far away the Vinales-Valley was)

While staying in Vinales we could use the bikes to explore the region. They gave us the possibilty to reach isolated farms and to get away from the touristic centre.

The return to Pinar del Rio was like the way there to Vinales: first uphill then downhill. We went directly to the partner school and donated our bikes. We signed a contract about donating our bikes and left them there. Riding bikes after a long time without sportive activities was a nice change. In my opinion travelling by bike was the perfect way to get to know Cuba. We could see how the landscape changed, getting more inland: traditional to modern. Ending our travel by bike donating them, makes it even better, because probably the most Cubans never would be able to afford one.