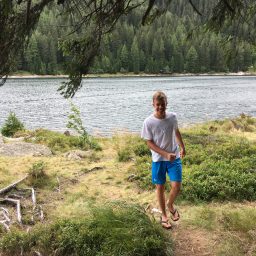 If you ask people that have already sailed across the North Atlantic ocean “What is so special about it?” then they need some time to reply to the question. Is it the deep blue out there? Is it the salty breeze in their face? Is it the noise of the waves breaking on the bow of the ship? “No, not only…” they will say. There has to be something in between. Something you cannot explain in a few sentences. So I will try to explain in some more words what makes it so special for us, as a group of students that has been sailing for the last five months and have crossed the North Atlantic ocean.

It was nine o’clock in the morning of a cloudy Tuesday on Bermuda. Some days earlier we had prepared our ship for the way back home. In fact, we changed some old material and reefed the gaff sails to make sure that the Thor could also sail with stronger winds. There was hardly anyone not being filled with anticipation. All in all, there was adventure in the air. But the strongest discipline could not help against the ever present seasickness as many of us got seasick straight outside of the bay of St. George’s. The weather stayed cloudy, rain often pattered against the sails and the air inside of the ship got really bad and humid. So, it took us a few days to get used to the sea again.

It is always like paying in advance with the currency of seasickness for the great feeling that comes up afterwards. Then there was time to spend hours on the poop deck or in the rigging. The angry splashing turned into well-mannered rolling and the next days we came into the old routine. It was great to see the product of communal work; apparently the ocean does not only do something with you and your mind. It does something with the whole crew because we are alone out here. The world far behind the horizon gets less important and we come back to ourselves, there is no stress, no worries and if you ask me there is also no time. The sun is just going up and down, the stars are glimmering in their full glory and in some nights, there is honey on the moon.

I am now sitting on the poop deck with the sound of smooth guitar playing in my ears, the smell of fresh-baked bread in my nose and the endless movement of the ocean underneath my feet. Our minds are free, all the heavy thoughts have been blown away by the winds that took us with them on our way across the North Atlantic Ocean.

And maybe that is this special special thing about this Atlantic passage. It is the deep influence of the underlying power. Now, as we have crossed the ocean, too, I can understand why sailors do not find the right words for describing it. But I hope this little text helps you back home to maybe just imagine a bit of that special feeling – crossing the North Atlantic Ocean!