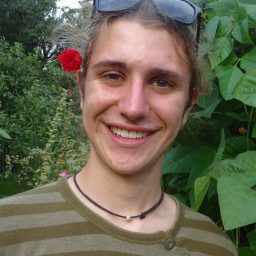 On the sixth day in Tenerife we visited the Thor Heyerdahl museum in Güímar. Finn told us in his presentation something about Thor Heyerdahl and his expeditions. We met Jacqueline Heyerdahl, who was the wife of Thor Heyerdahl, and we saw the Pyramids of Güímar. Our day started a bit later than a normal day on our ship because the day before we had climbed the Teide and were very tired. The breakfast was a brunch, that means bigger than a normal breakfast, and started at 9 o’clock. It was incredible because of the eggs, the pancakes and the porridge.

After a short cleaning of the ship the bus brought us to Güímar. In the museum its director and Jacqueline Heyerdahl, the wife of Thor Heyerdahl, welcomed us. We took a photo in front of a model of the Ra (one ship from Thor Heyerdahl`s expeditions). In the library Finn started his presentation. The library was founded by Thor Heyerdahl when he lived at Tenerife and organized the excavation of the Pyramids. At the beginning of his presentation, Finn asked the question: „Was Thor Heyerdahl a scientist or an adventurer?“. Some students said he was a scientist but others thought he was an adventurer.

Thor Heyerdahl headed many expeditions but the most popular were the Kon-Tiki, Ra, Ra 2 and Tigris expeditions. With his expeditions he wanted to prove his theory of mass exodus over the oceans. He thought that America was inhabited by Europeans and Polynesia was inhabited by people from South America. So he built the “Kon-Tiki“, a raft built of balsa wood, and he crossed the Pacific Ocean with it in order to prove his theory. The Ra and Tigris were ships built out of reed, with the help of native Africans and Americans. He sailed across the Atlantic Ocean and the Mediterranean Sea. He thought that Egyptians and Sumerians sailed in their reed-boats across the world.

Finn told us general and important informations about Thor`s life and his expeditions. For example that he was born in Larvik, Norway, joined the WK 2 and was always looking for Pyramids. Later Detlef and Jacqueline told us further details about the expeditions and what a man he was. We asked them questions like how the daily routine was on bord of the Tigris and what Thor thought about the climate change.

Detlef answered that it was a little bit like on our ship, nobody wanted to cook and the biggest problem was who had eaten the chocolate on Christmas, because they only had a few pieces of chocolate and on Christmas day they were gone… He said the journey with Thor had changed his life. And he made life experiences he wouldn`t miss. The Tigris expedition ended in North East Africa because of a war at the coast of the Red Sea. They wanted to point the way forward against the violence in general, so they burned their ship. Detlef and Jaqueline also said that Thor was a very convincing person. He always had a goal and he knew what he did.

After the presentation, our feedback to Finn and some questions we left the library and went to the museum and the pyramids. In the end, our opinion was, that you couldn`t say that he was an adventurer or a scientist, he was both. A guide showed us the pyramids and their part in the sun observation. And we watched a short movie about Thor`s theory about mass exodus.

Finally, Jaqueline told us what was very important for Thor: internationality, safe the sea and learn from old civilizations.