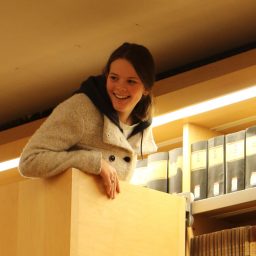 During our stay in Cuba we visited the “Escuela Federico Engels”, a school that seems like ours at home but is actually quite different.

The biggest difference you can see without even visiting a Cuban school, is the uniform. It’s the same for every student in Cuba, only the grade matters. Children till 6th grade wear red bottoms and a white button up. For the students till 9th grade it´s the same, only the colour of their bottom changes to yellow/brown. All girls have to wear skirts, only the female students visiting the “Pre Universitario”, a Highschool like school wear skorts, shorts looking like skirts. The colours are again the same as the boys, dark blue bottoms and light blue blouses.

Additionally, the ‘Escuela Federico Engels’ is a special one for sciences and you only get in by application. You have to write a test in history, Spanish literature, maths and biology, physics or chemistry. Like everything that has to do something with education in Cuba, the school costs nothing. Everyone who lives in the province Pinar del Rio can apply. A lot of the students live on the campus because their homes are too far away from school. One “week” at the ‘Escuela Federico Engels’ consists of 11 days of classes and after that, the pupils have three days off where they can visit their families at home.

We joined some of the students for three days, visited the campus, took part in their lessons and saw how their daily routine differ from ours.

On the first day we came by in the afternoon and were greeted nicely. Some students prepared dances and a choir sang ‘Guantanamera’, a traditional song of Cuba. The next day we were introduced to the school and its specialization on sciences. In two different groups the students showed us their campus till lunch. Like on the Thor the pupils had to help in the kitchen. After lunch we joined the physical education lesson. Before anyone was going to the sports ground, music was turned on and we warmed up by dancing to a famous song called ‘Talento’. After that, each of us could decide whether to play volleyball, football or basketball.

For dinner we went back to the hotel but in the evening the students had planned on giving us a little dance class combined with a tour through their dorms. Every dorm was decorated for Valentine’s Day and the residents of each room had prepared a little show. Afterwards we started dancing and you could see pretty well who´s Cuban and who´s not. We´re just lacking the right sway in our hips. On our last day we joined different classes in groups of three to four. The classes are pretty similar to ours, except that every class has a representative, the student with the best grades, who assists the teacher in his or her lesson. The person also has to help to keep order in the class.

After lunch Marc told us something about ‘Jose Martí’ and then we had an interesting presentation and discussion about the trade embargo with the U.S. We spent the rest of the afternoon in the hotel preparing ourselves for the gala in the evening. Singing ‘Frei wie der Wind’, a German seaman song, in a hotel hallway is a funny experience. At the gala, I have to say it sounds way more glamorous than it was, a lot of dances were prepared, also Finn, Lara, Jasper and Alea were showing the ‘Friesenrock’, a dance that’s quite popular on the Thor. Many items on the program were songs, for example Spanish Ballads or ‘Zombie’, sung by Julia. All in all, it was a really nice evening. The next morning, we went to the school by bike like every morning, except this time we left our bikes as a donation, said goodbye to the students we made friends with and danced a last time to ‘Talento’.