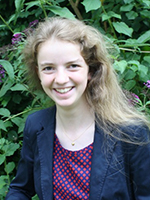 Most of us saw the sailing boat „Thor Heyerdahl“ in reality for the first time. It is such an amazing ship! However, all of us realized that there was going to be a lot of work to do before we were able to start the biggest adventure of our lives. Fortunately, there were many volunteers who helped and taught us how to do all kinds of work on the ship. There were pupils who had sailed on the „Thor Heyerdahl“ the years before, the „Ex-KUSis“, other crew members, people who are in the club „Thor-Heyerdahl e.V.“ and our KUS-Team 2014/15.
We worked hard all day long in our special working-groups: painting, preparing, cleaning, repairing and working at the office. And there was already a cooking-crew that cooked for us, the hungry craftsmen.

I prepared an interview with Alex, a member of the crew:
Reporter: What was your task at the wharf?
Alex: I helped to put all the stuff into the ship and organized the transportation of the luggage. I also helped to fix the new rudder, which was said to be very good.

Reporter: How many times have you already been at the wharf?
Alex: This was my fifth time at the wharf time of the Thor Heyerdahl.

Reporter: And how long had the crew worked at the ship, before the new „KUSis“ arrived in Kiel?
Alex: The wharf time already began on Friday noon, but I just arrived on Monday.

Reporter: What kind of changes have been done at the ship?
Alex: The ship was taken out of the water completely, where it was cleaned and painted, the rigg was repaired, the technique and machine were renewed and proved and we got, as I already mentioned, a new rudder.

Reporter: That is a lot. Was it very hard for you?
Alex: There were other wharf times which were harder than this time. But it was difficult to organize the work at the wharf and the preparation for the big trip.

Reporter: But did you also have fun this time?
Alex: Yes of course I had a lot of fun here. I liked to work with my colleges and the „Ex-KUSis“ I met again. I also liked that the rudder works.

Reporter: Did you like the cooperation of the new „KUSis“ and the crew?
Alex: Yes I was very happy that everybody was open-minded and wanted to help, even though they did not really know how to do it and sometimes a crew member had to help.

This was an interview in German translated into English.

So now I am here at the Thor Heyerdahl and we are sailing. That is more than a good sign that we had a good and successful wharf.