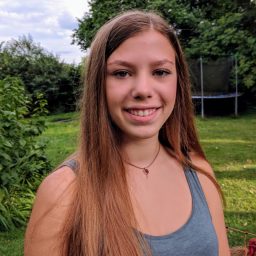 written by Marlene B.

Today we visited the Thor Heyerdahl museum in Güimar to learn more about the person our beautiful ship is named after.
We went by bus because the museum is about an hour away from the port in Santa Cruz. When we arrived there, Jacqueline, the widow of Thor, was already waiting for us which is pretty cool, so we could ask her more personal questions about him.
After the museum‘s director welcomed us, we went to a big library which is normally closed to the public because only scientist meet there once a year to share their results and studies in their field of interest. After that we listened to a presentation by Kim about Thor Heyerdahl and why it is so important to know who he was and what he did.
Thor wanted to prove that for example Polynesia was inhabited from the east and not from the west as many scientists believed. He wanted to prove his thesis by starting an expedition with a hand-built replica of a traditional reed raft and called his expedition “Kon-Tiki“.
His second expedition is called “Rapa Nui“. For this expedition he crossed the Atlantic Ocean like we are doing at the moment. The big difference was that he did it with a raft again and not with a sailing ship.
In 1977 he started his last adventure “Tigris“ to prove a cultural exchange between Mesopotamia and Egypt. And the best thing about this expedition is that Detlef (our captain) was one of the crew members because he was one of the navigators on this ship. So he knew Thor Heyerdahl pretty well and a lot about this expedition. We took the chance and asked him many questions about him and the journey, for example how they dealt with Christmas far away from home, exactly as we will do in a few weeks. Thor wanted everybody to have a chocolate bar „Bounty“ at Christmas but when the time came they were not there anymore. Probably, someone ate them unauthorized. So they were in a really bad mood.
Concerning Thor‘s personality, people tell that he had the ability to bring people from different nationalities together, always walked right up to them and impressed them with his unique attitude and openness. Jacqueline and Detlef agreed to that.
At the beginning of Kim‘s presentation she mentioned that many people are fighting about the question if he was an adventurer or a scientist. So I asked Detlef what he thinks about this question and he answered: “He definitely was a scientist. Thor always explored the world and did risky journeys but he did it it for the science. The sailing part wasn´t his priority and rather boring for him. He just wanted to prove his theories“. Jacqueline laughed and said that she is of the same opinion. Thor was 100% a scientist. Many of us students think he was a scientist and an adventurer at the same time because he used the adventure to prove his theories.
After that we walked around the museum to learn even more about Heyerdahl.
The most impressive experience at the museum was to be allowed to take a closer look to a hand-built replica of a raft he used for one of his expeditions. The raft is in a big class cabinet, and usually you are only allowed to take a look from the outside, but the director opened it for us, so we could go in and take a closer look. Detlef explained us how they lived with eight people on such a small raft. They only got a box full with private things. We were very impressed how they managed to live on such small space. After that we went to the cinema of the museum to watch a film about Heyerdahl‘s discoveries, which was very interesting.
All in all, it was very cool to learn more about Thor Heyerdahl and to know more about him now and why our ship is namend after him. It was a unique chance to talk to Jacqueline and Detlef, who spent the time of their lives with Thor Heyerdahl, to get to know him more privately than only through public information.