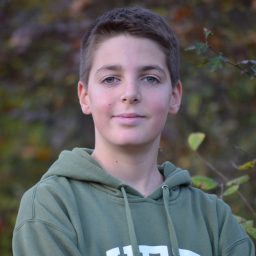 „Michael!“, „Michael!“. „It is half past six, there is a Signal K in half an hour. Are you all right?“, That‘s how I was woken up on Wednesday, the 20th of December 2017. But why was there a Signal K at this early time of day? From Sunday until Tuesday we have been at the Tobago Cays. There we went snorkeling, swimming and enjoying the reef. Than we left these islands and traveled to the ‘Island Of Spices’, also called Grenada; arriving in St. George’s (Grenada’s capital) was what the Signal K was for.
Our boat actually was very unusual there between these white motor boats at the Port Louis Marina, St. George’s. It looked very funny because they were all really clean, shiny and new, and we … well, let’s not talk about that … . So in addition to our daily cleaning tour, we had to pack the sails, so that our ship looked nice, as well and that visitors could take some nice pictures of it. Later on we were allowed to call our parents and family, that was really nice. The harbor was very luxurious, with wifi, a pool and showers. After many weeks only at sea it “wasn’t that bad”.
On the next day there was a talk about Grenada held by Paul. Grenada is called the ‘Isle Of Spices’ because many different herbs, spices and fruits grow there. The result of that was shown to us by Malte, when he gave us a tour through Grenada’s capital St. George’s, where many people sold local spices on the streets. When we visited the local market with its many different shops and stalls, we could see the different spices being sold there, as well. In the evening we got our mail from home: the whole table was full with nicely painted Christmas letters. We all were very happy :D. Thank you for all your greetings!
Of course we also had the chance to visit the island by ourselves, in groups of at least three people. There we had a little adventure: in the city a man wanted to show us around. We visited the chocolate museum, the local market and a cricket stadium. The problem was that he didn’t leave us, so we told him, that we would like to continue walking around alone. We gave him a small tip and as a result we were ‘free’ again.
On the next day we explored the whole island in small groups, consisting of four students and one adult. We could visit different sights and natural phenomenons. The trip had to be organized by us students – only by us! My group took a local bus to “Laura’s Spice and Herb Garden”. There we were shown how different kinds of plants grow and how you can use them, for example cacao, cinnamon or nutmeg. After that experience we tried to catch a bus to the ‘Westernhall Rum Distillery’. The problem was, that the bus line only drove back to St. George’s and not to St. David’s. So we walked on a small road through the landscape of Grenada. Than we saw a bus and we were driven to the Rum Distillery. Our tour through the old rum museum and the area was interesting and our adult, Caro, tried some. After that we went back to the Thor. The other groups also visited very interesting sights. In order to get a better view of Grenada, all groups presented their results in the evening. Some brought something to eat, for example a cocoa fruit, stinking toe (that’s a fruit, that doesn’t smell well …) or chocolate.
After crossing the Atlantic Ocean, it’s necessary to do some working on the ship, like repairing wood and ropes, creating plans for the new part of the journey, painting or storing the new food like fresh fruits and vegetables. That was very hard work, but in the end the Thor looked very well again.
Now, our stay on the island Grenada is nearly over and everybody does their preparation for the Christmas party today in the evening. We all enjoyed it very much, especially the different culture and the variety of spices. We are looking forward to our stay in Panama in one week.

Last but not least, I wish all the families and friends at home Merry Christmas!