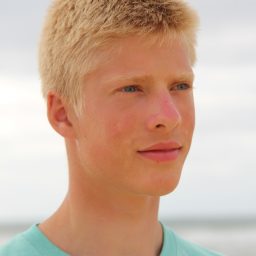 And finally, we had our holidays at the reef from the 16.12 until the 19.12. On Saturday evening we arrived at the Tobago Cays and dropped our anchor. Before we could go in the water we had to make the ship ready: we cleaned the ship in every corner and in addition to that we packed the sails and set up the sunsails. Following, our boatswain installed a rope from the fore course sail down to swing in the water, what was great fun. With a bit of practice some of us managed to make some tricks like a backflip.
At the end of crossing the Atlantic Ocean the leaders handed us down the ship (so every function on board was fulfilled by a student) and tonight, we had a small feedback round concerning the experiment. We had done it in small groups and later we came together to collect our results and discuss our flaws. On Sunday we had a very big breakfast and before we could go to the beach we had to listen to Vicky’s presentation on the biotope of a coral reef. It was very interesting because she said a lot about what a coral looks like and what it needs to live or what is really bad for a coral.
After her presentation a few of us went to the beach to learn how to snorkel and the others had their examinations to go to the reef. That means that we had to do an exam, that the sail training crew sees, how we snorkel and if we can go to the reef or if we have to practice it a bit more. Before lunch the first of us had the chance to go to the reef. I was in the first group and it was amazing. We saw many different fish and corals in different colours, sizes and forms. After the reef we drove to another spot to see some turtles. Everyone has seen one and for the most it was the first time to see a wild living turtle. For me it was the first time, too.
After a lunch the other group had the chance to go to the reef and we went to the beach. The island looks like a Caribbean island on a postcard: white beach, coconut palms and very sunny. Some of us climbed up the palms and took some coconut to drink. The coconut water was very refreshing and delicious, too. After we came back in the evening we had dinner at the Thor. Our day at the reef was divided into different anchor guard shifts. Those shifts were always one and a half hour shifts and everyone had at least one per day.
On Monday I was in the kitchen group. The others went to the reef and to the beach, again. In the evening some others had kitchen duty so we could go to the beach or to the reef. This division was in place for the whole vacations because it is a bit unfair when you have one-day kitchen duty in three days and the others can chill the whole day at the beach and drink some fresh coconuts.
Today it was Paul’s birthday so we had an apple cake as dessert in the evening. Also, we solve a riddle to find a treasure on the island where Pirates of the Caribbean was filmed. At night we slept on the island in hammocks. That was great. We played a game with the name ‘werewolf’. When it was dark we walked along the beach and watched the stars. On Tuesday morning we made a Christmas picture for the website and after breakfast a few of us, exactly sixteen, had the chance to go to the island and look for the treasure.
We drove with the dinghies out to the reef and then to Petit Tabac, the island where Pirates of the Caribbean, was filmed. We looked around and started to dig for the treasure. After an hour we found a cross on a palm. We digged around the palm and found a big box. After we opened it and put some things from us inside we buried the box for the next Kus years. When we drove back to the Thor our engine had a trouble for a short time, but luckily Laura fixed it so we didn´t have to paddle the whole way back. After lunch we did a last trip to the reef and the others went to the beach. When we were at the spot from the turtles we saw a ray. It was really impressive. In the evening we left the Tobago Cays under sails with course direction to Grenada, St. George´s.
That was our holidays and I enjoyed them really much because we had a lot fun.