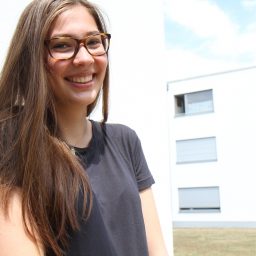 A lot of us already have experience with living in a host family. Regularly, you take part in an exchange programme organised by your school or a special organisation to improve your language skills. Then you go to a country, where you can already speak the language or at least can communicate a little bit. That is how most people imagine it, but here it was a little bit different. Spanish was a totally new language for the biggest part of the group and we only have had a few lessons on the ship. That was where we had learned all of our vocabulary we applied in Panama.

When we arrived in Boquete we were all quite excited. On the bus we were practising what we havelearned in our Spanish lessons on the ship and that made us even more nervous. Would we be able tospeak with our host families or would it be an embarrassing silence? Luckily, there was not much time left to think about that for too long because we arrived very fast at the language school. There, our host parents were already waiting for us. They looked all very friendly and when we got sorted into different families, every single student of us got welcomed with a warm hug. Then we were taken to our new home for the next few days. It was kind of a strange feeling for all of us because that meant that we as a group would not share an accomodation for the first time since we got on the Thor Later, when we entered the houses, we recognized that they looked nothing like ours in Germany: they were small and simple but had everything you need for living and had their own charme.

After showing us our room, the next item on the agenda was dinner. Generally, communication is a big thing while having a meal together. Let‘s say that went “mas o menos“. Speaking with hands and feet is a new trend, I guess… After a while it got easier and everyone had quite a plesant time in their host family. Going to school again was not a problem for us. Into town we got by taxi or those, who were living in Alto Boquete took a special bus. Others were taken by car by their host families. After we had all arrived
at the language school, we met for a chat to tell each other the latest news of our nights. The greatest thing about that was the small coffee shop nearby, where we bought coffee, hot chocolate and tons of muffins. Although we were all quite full from the lovely breakfast that was always prepared by our host parents, there was still some space for a good muffin.

At eight o‘clock lessons started and they lasted until 12 o‘ clock. Then we got back together with Tobi and Karina to talk about the following afternoon. Sometimes we had a special programme and on other days we had free time. Most of us spent their day together in the city and a highly requested place to be was one of the coffee shops where they had free WiFi. These hours were used to get in touch again with our families and friends.

At seven o‘ clock we had to be back home again. That should not be a problem one might think but I can tell you that it was sometimes quite difficult to get a taxi in the evening because of a big festival that was taking place in Boquete. In the end we always got home somehow and that made our host families quite happy.

A little bit later we had dinner. That meant for most of us eating something fried. Not like we know it from Germany together as a family, no. There was everyone eating on their own. Some family members in front of the TV, others some hours later. Most of us were not so close with their host family because there was not much time we could spend with them.

As soon as we were laying in bed we got a strange feeling. That was not because we did not feel comfortable with the situation. It was because we were missing our KUS family. Going to bed alone after such a long time together made us appreciate the time we spend together even more. All in all, it was not so hard for us to say good bye to our host families after a few days,to be honest. But still we enjoyed our time. It was a totally new experience and not comparable to any regular exchange programme like we know it from home.