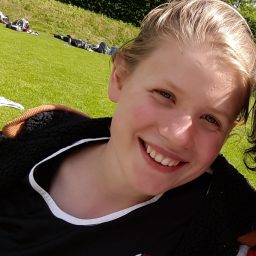 There are still some places you cannot visit by car, plane or ferry. To explore them you need your own ship. Luckily we are able to throw our anchor at these places. Like that we got the possibility to see, how the Kuna tribe lives, doing a split between tradition and being influenced by the modern world.

Kuna Yala is a semi autonomous territory, were the Kuna tribe lives. Since a revolution in the last century they have been allowed to organize their territory by themselves. Kuna Yala is partly on the mainland and also includes 400 small islands. It is difficult to reach. A few years ago a very small airport was built and a Columbian ship carries food and useful things there once a month but that is it. Even the parts on the mainland are not easy to cross because they are covered with rain forests.

The islands we are anchoring in front of are twelve miles away from the next village, which means people have to overcome twelve miles to buy food or anything else. It is a long way if you are sitting in one of the traditional boats many Kunas still use. The boats are made of one tree and only a few got an engine, which is luxury here. Most people have to row or sail. We will try this traditional kind of transport a few days after our arrival, when we will come to the island Nalunega but the first islands to visit are the “swept” and the “coconut” island.

The swept island is cleaned up very well. It looks like a little paradise with palm trees, a beautiful beach and a reef in front of it. It is a really small paradise. If you walk around it, it takes you less than 20 minutes. At the moment an old couple takes care of this island and their grandchildren are visiting them. The man told us that this is his wife’s island and he has got another one. If a Kuna says that the island belongs to him, it does not mean that he or his family own the island. Kuna Yala belongs to all Kunas and nobody is allowed to own parts of it. Still not every one is allowed to use every island as he or she wants to. There is always a family which takes care of the island and earns the money, which they get for the coconuts or other natural products from their island they sell to other people. They just do not own it and a few years
later it could be another family, which takes care of it.

We are calling the other island “coconut” island because we bought some of the many, many coconuts, which grow there. Again there lives just a couple on the island. After three students negotiated with them, we paid a few kilo of rice, coffee, milk and water for one hundred coconuts. Coconuts are important for the Kuna tribe. Before they took over the Panamanian Balboa and the American Dollar, it was their currency. Buying coconuts is only one thing, we did on this island. The second is collecting garbage. We split up in small groups and walked along the beach. After 90 minutes we met again- with 20 completely full sacks of garbage. The big amount of plastic, which is floating in the sea, is one of the differences to the last Caribbean islands we visited.

While we are staying in Kuna Yala we are also learning something about another negative point, which is part of life here, now. Nature has been feeding the Kunas for a long time. Rain forests, reefs and palm trees were giving enough. The Kunas also planted vegetables and it was not a problem but it became one. There are more people now and the Kunas will have to cut down more and more trees for planting. Besides many of the hunted animals were sold, their population was going down and now so they have to be protected. Our next stop is Whichub Wala an island next to Nalunega. It is as small as the others but there is a village on it and it does not look like a coconut paradise anymore. Instead of palm trees, there are small houses and the islands are completely covered with them. Mostly the walls and roofs are made of natural material.

The moment we arrived, Kunas were coming and soon our main deck became a market for handmade Molas and bracelets. A Mola is an embroidery consisting of up to seven layers, which forms a pattern. It is part of the traditional costume for women. Just like the bracelets, married women wear on their forearms and legs, which are made of small pearls. Nowadays only the older women wear them or at least it seems so. Besides most Kunas wear “normal” t-shirts and trousers. The modern world is reaching Kuna Yala although it seems to be far away from everything. For example, the man we went to for the paper work, which has to be done before we leave our ship, is distracted because he has to look for WhatsApp messages.

Islands like Nalunega and Panama City are the places, where most of the Kunas live. Many families decide to go to the city because they want to send their children to school. There are elementary schools in Kuna Yala, for example at Nalunega but for a higher level of education they have to go to the mainland.

Kuna Yala is a place we probably would not have seen if we had not our floating home the Thor Heyerdahl. We would neither have seen the coconut paradise nor the way the Kunas live. Our heads would not be filled with new impressions and thoughts about this part of Panama. Luckily, we got this possibility and were able to see Kuna Yala before we are visiting the mainland.