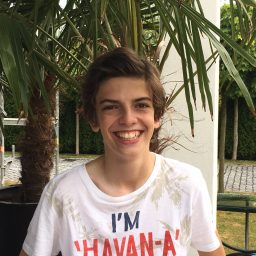 For the last three months, we have always been surrounded by the same people on our 50 meters long boat. Nobody could really imagine anymore what living with other people would feel like. And now, we get thrown into a new family, and need to communicate with arms and legs because our Spanish still lacks advanced communication skills. The stay in our host families in Boquete was a real contrast to our previous life on the boat with the people we almost know better than our family at home.

The moment we reached the Spanish school “Habla Ya“ in Boquete, we could hardly imagine how different the next few days would be for all of us. Matthias for example just thought about the food he was going to eat with his family in the following days, whereas Renée was thinking about the games she could play with the children in her host family. However Paul, our fabulous Spanish teacher and talented translator, called us name by name. The hands of the Spanish parents were raised in the crowd and thereby, showed each one of us, which family we would live with in the next few days.

After we went with our families to their houses, either by car or by foot, they introduced us to the rest of the family. Afterwards, they showed their spectacular houses and presented the delicious food they had cooked for us. Most of the time we ate rice with chicken, for the vegetarians vegetables instead, for dinner. There were also fried bananas, a typical food in Panama, that was very tasty as well. After we ate dinner, we either could show the family our interesting photo album, or watch Panamanian TV. By the way, most of the time when somebody was at home, one could watch TV, which was really interesting. A real surprise for all of us was, that everybody had his own room to live in, and sometimes our own bathroom as well.

In this week, we normally woke up at half past six in the morning, said “Buenos Dias!“ to our families and enjoyed the fabulous breakfast. It always contained some fruit, for example bananas or apples, but there was often cornflakes and scrambled egg as well. Because school started at 8 a.m., the school bus, only for KUS-students, picked us up at half past 7. The unexpected thing was, that everybody was looking forward to having school. That was because living without other KUSis gave us the feeling, that we missed a part, we really got used to the last three months. At 12 am we all had lunch together at school. Most of the pupils were given lunch from their families in the morning, but there were also some parents who delivered hot lunch – rice with chicken/vegetables – to school!
One special event was the holiday on Wednesday, a day that we were supposed to spend with our families. Some went on a trip to the typical waterfalls and canyons in Boquete. But there were also a lot of students, who missed each other really much, so they met at the Spanish school and shared their experiences of their new family.

All in all, the host families in Panama gave us an interesting view of the life in an different country. These are experiences, one will never forget, and maybe there will be some students, who will stay in contact with their families. I never thought, that there would have become such a strong relationship to the family in such a short time. But on the other hand, all KUSis are very happy to meet each other again, so that they can make their way to the Nasos, an indigen tribe and our last stop in Panama.