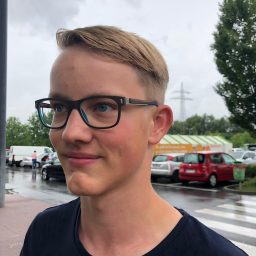 I think everyone of you have already seen a baptism. Most of them might have been a christian one, but now we sailors were also baptized by Neptune when we crossed the 40th degree of longitude. But first to the beginning of the story. It was Thursday, shortly before breakfast, when some students found a message in a bottle in our pool. It came from the King of the Seas himself. He said he would come with his wife Thetis on Saturday one hour after the sun has reached the highest place and all of us should assemble in the messroom in bathing clothes. The days until that date where special, because everyone was thinking about how the baptism will be. Nobody knew it but we saw the crew members picking some things. The day before I was working in the galley and they took parts of our trash and said, they want to do an experiment, but it was not hard to see that they were not telling the truth only by looking into their faces.

Then the day came. Since morning we were not allowed to go in the cargo hold, because that was the place where they stored all the things they had collected until now. We were not able to meet Neptune at one pm, like he wanted us to in his message, because we had a sailing maneuvre before lunch, so we had to eat shortly before the time when we would have had to meet in the messroom. Luckily our Captain made an announcement and told us to meet half an hour later than the King of the Seas said. This way everyone had enough time to put on the right clothes and sunscreen. Exactly at half past one all of us sat in the messroom – even watch number 1 who helped putting up Neptune’s palace – and was eagerly waiting for things to happen.

An eternity later we finally heard our Captain’s voice. He told Neptune that this time 44 people want to get baptized and that all of them had been very brave, responsible and cleaned up their rooms so they were as tidy as always. Then he called up the first student so we started clapping and shouting. When he went up everything was dead quiet and we only heard mysterious noises. After that we wanted the time to pass so we started playing card games. But soon that got boring so after a while we began to sing and invent stories. After three hours everyone got out of the bad air and the heat and got to meet Neptune, but we promised to keep safe how exactly the baptism was like.

But I still dare to tell you that it was very nice and funny for all of us. If you want to find out more about the ceremony you just have to make the journey by yourself!

Now I want to give you some facts about the origin of this baptism. It was invented by KUS but it has a role model. When the sailors traveled over the meridian dividing north and south, also called equator, they were also baptized because they had thought that it was impossible to cross it because the sun would be too hot there, so they couldn’t survive. So as soon as they crossed the equator they wanted to show their braveness and their faith in God. That’s why they started this ritual.

We didn’t cross the equator, but KUS wanted to have a ritual similar to this (and a special event during the transatlantic passage), so our Captain invented our “Atlantic baptism”.