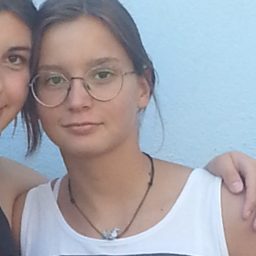 A drink out of calabazen and bamboo cups – another completely new experience for us, that we were able to do with the Nasos. The Naso are a tribe in the west of Panama that live at the river Teribe. A few years ago their king agreed to a project to build a dam into the river which sadly had a lot of impact on their culture and the way of life. The Nasos we visited live in the tropical rainforest near the village Silencio in houses made out of wood, with chickens running all over the place. The most outstanding thing of their culture, that I for myself saw, were the aforementioned cups and calabazen. Especially because we learned how to make these articles. Calabazen are a kind of giant not edible tomato.

In order to make bowls out of them, you have to saw them apart in the middle and extract the rest of the vegetable inside. When it‘s dried out you have a finished bowl and you can carve creative designs into it. For a bamboo cup you only need a big piece of bamboo, a saw and a knife. Bamboo has some parts in itself that are cut off from each other. So to make a cup you have to saw through the bamboo two times, one cut a little bit under this partition and the other cut as far over it as high you want your cup. While we were doing this we also learned how to make drinking chocolate and visited their plantations. The lunch over there was wrapped up like a present in banana leaves and we ate with wooden spoons, really nice.

We did all this in another Naso village further up the river. In order to get there, we were shipped up the river in the original boats made out of one tree. That was really impressive, sitting in such a boat and being driven up a river against the heavy current in the middle of the tropical rainforest by an indigenous person.

We also did a pretty interesting hike in the rainforest which luckily wasn‘t too long. There we saw a lot of frogs, even a few sloths and of course a lot of trees.

A really fun part of our stay there was the football game Naso vs. Kusis, or also known under the football club Warschau Thor Heyerdahl. The two games, first girls then boys, took place on one half of the big football field with two little goals made out of bamboo posts. But before the warm up could be done, we had to check if there wasn‘t any poisonous insect on the field or a Boa passing through the field. That wouldn‘t be great. The fact that it was pouring down before the match made it just a little bit harder. So it was a normal phenomenon that people were sliding all over the place and sometimes were just laying in the mud for having miscalculated their time that they need to slow down.

The games were played seven against seven, and the girls started. It was a lot of fun to play because all the others were cheering us and you seriously run without the risk to fall over. And of course always being in front was quite exhausting and the fact that except for Moa, Elive and myself nobody could really play football, too. We won the game the final score 4:1 with the help of our head coach Ruth.

Well the game of the boys was another story, they played against adults that play a lot in their free time. So we lost 2:5 in the end but we didn‘t play that bad. While the match somehow developed into a cheering challenge. „Panama si, Alemania no“ versus „give me a D, D, give me a K, K, give me a Q, Q, give me a H, H, what does this stand for? Delta, Kilo, Quebec, Hotel“. The callsign of the Thor Heyerdahl. When the two games where over we were so sweaty and muddy that we just started a mud fight. And then Nasos and Kusis alike walked to the river to take a bath.

In the evening we had a little goodbye event where the Nasos showed us a few traditional dances, but it didn‘t seem like if they do this very often. We also exchanged our presents, I received a carved boat with my name in it, really beautiful. We also sang “I am sailing“ with changed lyrics, the cup song and “Laurentzia“.

In the end, the stay at the Nasos was a really interesting stop but also really exhausting with all the activities we had. We experienced a lot of good things, especially the food was interesting and a little to exotic for us sometimes.