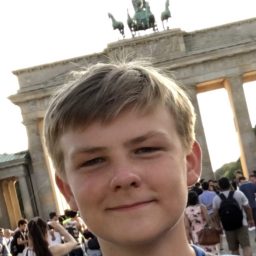 After a ten-day journey we finally reached Bermuda. Bermuda was discovered 1500 and colonized 1609 under the British crown. The country is in cooperation with the UK but they are kind of their own country for example they pay in US dollars and in Bermudian dollars instead of pounds. 360 pretty green islands, built from coral-reefs, are part of Bermuda. Because of chalk, as the only material, every house is made out of it and the roofs are white. Bermuda is far away from other countries, so they have to get drinking water only out of the rain. Their roofs are specialized to catch the rain for drinking purposes. One time I was on a little mountain and it was a breathtaking moment seeing an island full of white spots with the turquoise water and our and other traditional ships in the background.

St. George’s, the town in which we stayed with the Thor, is very beautiful. But there is one big problem for people like us, having a low budget. The prices are three or four times as high as in Germany. There’s no chocolate for under 5 $; just unbelievable and unaffordable. A pizza or a burger costs about 20 to 30 $, so for a KUSI it’s not possible to buy a normal meal and to get enough sweets for the North-Atlantic Ocean. But there is another reason as well why everybody is so carefully spending their money: Bermuda hoodies and shirts.

On our free day everybody travelled by bus or by bike to Hamilton, the capital city, and the most of us only for buying some clothes. Some people spent 10 minutes in the shop and others 2 hours. After that we visited the city with the malls and expensive and cool clothing shops. In the mall we ate a small cake and then we went to a bookshop where we spent a lot of time. Because nobody had enough money for a dinner, we headed back to the ship for just another normal free Thor meal.

The first few days we didn’t do anything interesting. In the morning we had school. There were four school days for us in Bermuda which started at 07:30 with breakfast and lessons from 08:30-11:45. After lunch classes went on from 13:15-14:50. In these four days we wrote our English and Spanish exams and did a cool experiment in Math about functions at the port and our first mate Jonas helped us from high up in the rig with the terms.

The last full day at Bermuda we spent working on our ship. In the morning we did the exercises which we were supposed to do and most of us had to help with the supplies and deck. The people working with the food supplies worked out a new structure for the freezing room and the cold store. The team responsible for the deck mostly removed rust and painted the deck. Other people cleaned the machine and generator room and bunkered diesel. I was in the team that repaired the rig, therefore we had to climb up high on top of the masts. My job was to put a new layer of “Hüsing”, a special type of rope, on the shrouds. It was a really amazing job because you are hanging in 20 meters height only in your safety harness without contact to anything else. The next day our stay ended and after a last message to our parents we left Bermuda with course to the Azores, back to Europe.