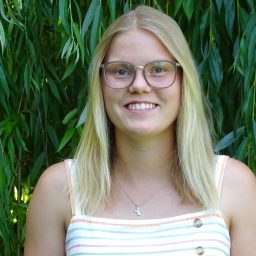 Stormy sea, waves crashing over the poop deck, rain, hail…we expected all of this. We prepared for all of those situations and we were ready. And then, everything was different from what we thought it would be. Sunshine, 20°C and good wind. We were able to eat outside, we chilled on deck the whole day and some of us slept outside, too. And it wasn’t too cold. We didn’t need our oil jackets, so it was really hard to realize that we were sailing across the North Atlantic Ocean.

One day we had a ships meeting. All students and the whole crew were there. Our captain and Emma showed us the new weather charts. After this we all knew that the summer feeling would be gone tomorrow. We prepared the ship for the storm. We took down a few sails and we packed them in a storm-resistant way. We pulled the ropes as tight as we could, to have something to hold on. In my evening watch we thought the bad weather would come but we were wrong.

At three o’clock at night I was woken up with the words: “The cold front is here!” I put on my oil jacket and my oil trousers over my pyjama as fast as I could. On the go I put on my rain boots. I am part of the SEK, the team which helps the watch if there are not enough people for sailing action. This night they needed help. We, the SEK, were on deck really fast. The wind had changed and was now coming from the other side. Because of that we had to move the sails to the other side, too. It was a little bit difficult, because it was dark and we only had the light of some flashlights. The ship began to roll from one side to the other because we had more wind and higher waves but we made it without any complications. After the nightly action we went to bed and slept again for a few hours before breakfast.

The watch in the morning was really wet and uncomfortable. I wore three hoodies and my oil jacket because it was only 14°C. With the higher waves it’s more difficult to keep the ship on the right course.

A lot of daily actions are difficult with this kind of weather. For example, putting on your clothes without crashing against the wall, drinking without making your shirt wet, taking a shower and keep standing under the water, sitting in class without falling down the bank, sleeping without nearly rolling out of the bed with every wave, or opening the fridge. You have to open the fridge with the wave and not against it. If you don’t do that everything falls out of it.

We have strong wind, but sadly it comes from the wrong side. So, our machine, called Olga, helps us on our way across the big ocean. Without her we would not be able to continue our way home. We are crossing the Atlantic Ocean the second time now, but this time we’re not on the way to the New World, we’re on our way back home.